Working together to advocate for policies and initiatives
that will advance and benefit the latino community.

The report is a review of all executive position holders in city government in Boston and Chelsea, as well as all appointed seats on boards and commissions.

The Silent Crisis II report, for the first time, includes three-year trends in Latino leadership in the two cities between 2014 – when GBLN’s original ‘The Silent Crisis’ report was released – and 2017. 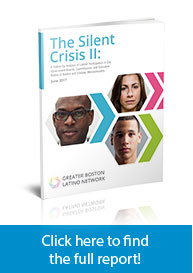 The Silent Crisis: Including Latinos and Why it Matters was conducted in collaboration with researchers from UMass Boston and Tufts University. The report, released in December, 2014, studied the representation of Latinos in leadership positions in Boston, Somerville, and Chelsea.

Researchers examined data from multiple offices across the three cities and concluded that Latino representation in executive positions, and on boards and commissions, was drastically lower that the Latino populations as a whole.

Following the release of the report, Mayor Walsh announced the formation of a new Diversity and Inclusion Team. The city’s first Chief Diversity Officer, Shaun Blugh, was tasked to work with the GBLN, city boards, and commissions to ensure that they meet the needs of a diversifying population in Boston.

According to The Silent Crisis report, the benefits of equal representation are broadly shared with other minority and nonminority groups. A representative bureaucracy where every group is included lends considerable legitimacy to government.

Given the growing presence of Latinos, government agencies ranging from economic development to housing, education, health and human services, and public safety will be more successful in their missions if they can bring more Latinos into leadership positions to effectively address the needs of the population at large.